We managed the construction of the new Dinuba Transit Center that was reconstructed from a 4,000 square-foot storage facility and now offers a lobby, conference room, space for a dispatch center and transit staff offices. Officially opened in April of 2014, 4CG Construction served as construction manager and construction inspector for the project that involved major demolition, and detailed oversight and reporting of all construction procedures and progress.

The $1.5 million Dinuba Transit Center was funded by a combination of California Transportation Development Act and Proposition 1C funds.

Copyright 4CG Construction - All Rights Reserved © 20XX | Made with ❤ by Topograph 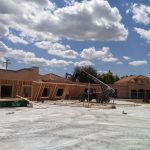